Guest Blog: We must not stay silent – from Michelle John 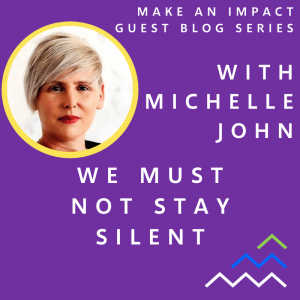 How many times in your life have you heard the saying ‘didn’t happen in my day’?

Whether we’re talking about crime or discipline, our parents and grandparents can be quick to suggest it’s a modern-day problem, thus absolving their generation of any collective responsibility for that particular issue.

Now it could be argued that in some cases, they’re right. As time moves on, society changes and so too do the problems within it. But in many other cases, the reason they believe it didn’t happen was because it wasn’t openly talked about at that time.

Take mental health for instance – decades ago, symptoms we now know to be part of a diagnosable mental health problem would be attributed to something else. And if someone was displaying behaviour which really made them stand out – they’d be simply hidden away in an institution for the rest of their life. Problem solved. Or not!

One area where the ‘not in my day’ proclaimers are particularly vocal is domestic abuse – an especially hidden form of which is my specialism.

I’m Michelle John, the Founding Director of an organisation called PEGS. I set PEGS up because I have first-hand experience of Child to Parent Abuse, and I knew there were other parents out there feeling as desperate and as lonely as I did.

I wanted there to be an organisation which acted as a safe place for those parents, carers and guardians who were experiencing physical, emotional, financial or sexual abuse from their children (ranging in age from pre-school to adulthood and beyond). A place where they could talk openly about their experiences without fear of judgment, blame or disbelief.

A huge part of the problem, I’ve come to realise, is that we’re just not talking about CPA as a society. We’ve seen dedicated campaigners fight for intimate partner domestic abuse to have its rightful place in the spotlight over the past few decades. Abuse from a partner or ex-partner needs to be talked about, solutions need to be highlighted to victims, and it must not be shied away from. The work these campaigners have done is essential.

And yet you’d think their work would have paved the way for society being more open to talk about other forms of domestic abuse, such as CPA. And it really hasn’t, in my experience.

Little babies often put their hands up to their face during a game of hide and seek and think that makes them invisible. We laugh at that adorable notion – and yet we’re doing the same to some of society’s most important issues!

Simply pretending something isn’t there doesn’t magic it out of existence. And actually, it causes so many more problems for the parents who are already going through hell in their own home.

It means when they approach professionals such as their GP or a teacher for support, that professional has a limited chance of even fully understanding what CPA is. So, that professional might tell them the child is well behaved at school, might suggest it’s their parenting to blame, or might not even believe them about the extent of the problem.

I’ve had desperate calls from parents because a professional has told them to just ‘take the weapon off’ their child who was threatening them. I know parents who’ve had to physically barricade themselves in their room to stop their child harming them. And I’ve lost count of the number of parents who’ve reported being told to ‘just parent them’.

Support from loved ones

And it’s not just professional knowledge that is lacking because we ignore CPA (and many other ‘taboo’ subjects in society). It also means that many parents are isolated from their friends or family if and when they disclose that they are being abused. It’s difficult for their loved one to understand when they may not even have heard the words ‘Child to Parent Abuse’ before.

Even the parents themselves might not understand what CPA is, and therefore the behaviour can escalate well above and beyond ‘normal’ childhood defiance before they even recognise that there is a problem in their household.

The answer is simple: talk openly about societal issues, even if they’re not comfortable topics.

How we reach that solution is the tricky part – educating all of the relevant groups (professionals, media, and the general public) is a time-consuming job, and needs to be done in the right way using the correct terminology and giving them enough knowledge to really understand the topic.

At PEGS, we’re doing what we can by raising awareness on social media, at speaking engagements, and across organisations such as police forces and social care teams. But we need many more advocates to join us so that we can realise a widespread change in the way society views CPA.

And while Child to Parent Abuse is my specialism, it’s important for us to stop thinking about a wide range of topics as ‘taboo’ or not for discussion. Ignoring them, using euphemisms to describe them (like years ago when nobody said the word cancer but instead used terms like ‘the big C’) or segregating those experiencing them (as with mental health) has been proven not to work!

Education, open conversation, media coverage and knowledge sharing on the other hand – these are the tools which really do work in affecting change. They can help new solutions to be devised, more research to be undertaken, and – perhaps most importantly – help those experiencing the problem feel included in society and that they still matter!

I’ve often said that CPA is at the stage intimate partner abuse was 30 years ago and – while I am committed to working tirelessly for as long as it takes, it’d be fantastic if the doors I was pushing to open were at least unlocked!

Talking about problems won’t eradicate them, but it will break down some of the barriers that parents face when trying to access support. Surely, we owe it to those struggling around us to at least acknowledge their issues rather than pretending they don’t exist?