Funders who say they support social enterprise actually need to do it! 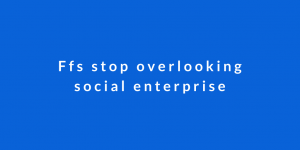 OK, say you dedicated your career to making a very misunderstood and overlooked industry (social enterprise) much more understood and mainstream, so that the “give back” nature of their model was mirrored by default across most businesses, meaning the “dependent on funding” stigma would cease to exist….

…and, say you did that because that very “give back” nature was the only thing that will keep the health of our people and planet going…

…and say, your efforts were thwarted by funders overlooking social enterprise in favour of helping organisations whose very models are reliant upon funding…

…then you might see why I’m slightly pissed off.

Honestly friends, I really am tired of funders saying they have specific grant programmes for social enterprises when in fact they’re actually giving it to charities.

That’s not what I’m saying at all. Let me expand…

But the biggest point about most social enterprises is that they get the majority of their revenue from trading, and a minority from funding, however, the small bit that is from funding goes into developing more products and services that further benefits people and the planet.

Now, take charities on the other hand. Charities get most of their income from funding, which is fine, but that’s not my point.

My point is this, if specific funders who have SPECIFIC funds for social enterprise businesses, overlook them and give the funds to charities which support their projects, then that’s totally temporary and they’re stopping social enterprises using that money to reinvest into products and services that will benefit the triple bottom line long term, especially the economy!

And Lord knows we need that right now.

When will grant makers change their funding criteria so they fund real social enterprises and not just those that use that name when it suits them, i.e. to make themselves eligible for a pot of funding.

Far too much money is being pissed away on projects, when, if given to the right organisations, could actually be transformational.

So, if you’re a funder, what can be done, then?

Well, firstly, specify what your threshold is for an organisation to be classed as a social enterprise, and, (this is the big one) BE CLEAR about what the grant needs to achieve (i.e. revenue growth, development of a new product/service or trialling of a product/service).

And, if you’re a charity, then apply only to grant makers who give mEpioney to charities and NOT those who give to social enterprise.