This could be the best support social enterprises have ever had

Written by Administrator on 19/09/2020 in Bits & Blogs, Strategic Development 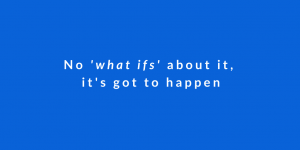 From What is to What if by Rob Hopkins (thanks Servane Mouazan from Ogunte for the recommendation), has given me the kick up the ass I need to up my goals.

The goal being to seriously ramp up and improve what social enterprise support looks like for both organisations and individuals.

And, if you’ve ever read any of my stuff before, you know that it will take nothing short of a practical, impact-led approach.

Because, let’s face it, we’ve been getting it wrong for too long now, it’s a joke.

To put it in other words, if you’re a fan of the old metaphorical analogy, we’ve been ‘applying plasters to huge cuts and wondering why it’s still bleeding’, or how about this: ‘we’re trying to put the egg shell back on even though the eggs are totally scrambled!’

So, if my goal is to make social enterprise support absolutely awesome and deliver maximum impact for the organisation and individual, I bet you’re now wondering what the hell that means and what it looks like for all involved.

Well, stay tuned, my friend, because it’s about to get specific…

So, what does maximum impact support even mean?

For the organisation, it means increased income and an increasingly viable business model that includes better strategic decision making, better skilled and more effective staff/board members, and increased impact on people and the planet.

It also means getting support with on-point marketing, and ultimately getting the financial support to maximise their impact.

For the individual, maximum impact support means having the right skills to do their role effectively, as well as having the skills to progress and being supported to their job.

OK Heidi, that’s great, but a bit like your egg analogy, that’s just a load of scrambled words…so, what does this all actually look like?

For organisations, impact support ultimately looks like you’re being enabled to achieve your big idea with the right support at the right time.

More specifically, it’s focusing on finance, mentoring expertise and skill development, so your organisation is equipped with what you need, opposed to trying to fit into start-up, growth and scale stages that are too ‘one-size-fits-all-esque’, and in reality, don’t have defined staring or ending points.

Traditionally, the available support is very much geared this way, which is why I want to change it in an attempt to make it a lot more tailored.

And, I have to say, I have real good reason to champion this new approach, as through my work with social enterprise and charities, I see the major flaws these people experience when it comes to getting funded.

BTW, what’s the deal with funders’ funding criteria being so outdated!?

So much of the criteria was created when the only way to do good was through a charity, which, oh lord, don’t get me started, is so terribly archaic to think of social enterprise like a legal structure, it’s laughable.

(PS. If that’s the first time you’ve read that social enterprise is NOT a legal structure, then I need to appear in your feed more)

And while I’m at it, stop funding bloody projects! I get that projects enable funders to show the impact they’ve had in a distinct and defined way, but projects do not maximise the impact of, or on, the organisation in the long run.

I promise you that is not a harsh statement. Funding projects creates short-termism, which in turn creates the need to create new projects, thus disenabling them to develop a business plan beyond three years, and, in a lot of cases, just six months.

So, what’s the alternative?

Well, it’s exactly what I propose in my impact-led support system.

Instead of looking at short-term fixes, let’s fund social enterprises to develop as organisations, to create their own products and services, to develop the right systems and technology, build their capacity to generate income and to have a great staff team.

Speaking of which, what does improved impact-led support look like for individuals?

It’s no surprise to learn that one of the biggest issues for individuals is a lack of social capital, which usually comes from not knowing the right people and therefore not having a seat at the table. This usually ends up in them creating their own table, to which a sort of tumbling effect happens, as they struggle against mainstream competition for absolutely ages.

Can I just say, it really shouldn’t be that difficult, but then, it takes someone to make it easier: Me.

So, I want to improve this by supporting social entrepreneurs and their staff by helping them focus on building their network and capitalise on the financial support that is available from peers and leaders in the sector, as well as those outside of it.

By doing this, we’ll be sticking ones up to the patriarchal approach of ‘it’s all about who you know’, making it much fairer for people to get help.

The other huge issue is around an individual’s capacity to develop all the skills they appear to need – especially if you’re female you’re expected to be skilled in everything before you can get any support (more on that when the research findings on the barriers to women scaling social enterprises are published).  This approach means that burn out is a huge risk, and there’s no real guidance or support on this…well, at least there wasn’t.

In short, an impact-led support approach will enable founders to create brilliant teams, empowering each person within it to be the best they can be in their role, and garner great things for the overall mission of the organisation.

So, now over to you – what do you think about this? Do you think an impact-led support approach is right, wrong, or are you undecided? Perhaps you think I’ve totally missed the mark, and are waiting for me to shut up before you let me have it!