Guest Blog: Changing the world with asset based community development 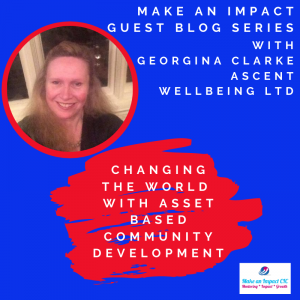 A blog about community development – by Georgina Clarke

Why I am passionate about Asset Based Community Development and why I think it can change the world so we are far better at addressing health inequalities and tackling social injustice.

It was around 2006, after about five years of working in the public sector, that my approach to my community development work completely changed direction and I started to focus on community strengths rather than deficits.

The reason for changing from a deficit to a strength approach was that in 2006, I was leading teenage pregnancy work with young people in a Berkshire Council, and I had an epiphany. I was sitting analysing local community data, considering issues such as obesity rates, teenage pregnancy levels, deprivation, levels of alcohol consumption etc. I suddenly thought if I was a member of this “deprived” community, how disempowering it would be to see this summary of my community, of which I was really proud.

This epiphany led me to research the field of Positive Psychology. It turned out psychologists in the 90s had similar epiphanies to me, where they realised that the study of only what is wrong with us as humans, misses great opportunity for people to understand what is right with us and how to enhance our potential. I also discovered Asset Based Community Development (ABCD) which builds on the strengths of communities.

I dabbled in ABCD for the next few years but was limited in what I could achieve as I was often working directly for Councils or government funded charities. Increasingly, Councils were focussing on cost cutting and short-term outcomes, possibly because of patterns of electoral voting where politicians were not really incentivised to implement ten-year plans as they had to focus on winning elections. I often saw Councils exercising strict controls over their own agendas e.g. getting people back to work, reducing obesity etc, which led to tension between their own agenda and what was important to residents.

My 2015 MSc dissertation was about evaluating community wellbeing and my research observed that Council health plans often include top down targets such as helping people to stop smoking but these were in juxtaposition with bottom up targets such as encouraging people to take responsibility for their own health. I pointed out in my research, you can’t really have it both ways – either you are deciding for people or you are letting them decide for themselves.

Recent projects I led, focussed on using ABCD approaches in local communities to tackle health inequalities. The idea is that if you notice the strengths in people and communities and build their skills and confidence, then inequality is reduced as people will have more of a voice, have greater confidence, will take action and feel empowered. Inequalities can be experienced through many factors;  living in poverty, discrimination and prejudice, homelessness or poor housing, disability and health conditions, lack of education and many more. And with the ABCD approach it is imperative that you involve groups who experience those inequalities not just organisations and people who work in the field or want to help out.

The result of this recent ABCD work was that I saw the greatest impact and transformation I have ever seen through my work, or any projects I had observed in my 20 years in public sector. One community in particular (in the top 5% most deprived nationally) started to really thrive, people became empowered and realised they could influence what happened locally. The resilience of the community increased as a new resident led charity is now the conduit for residents tackling local social issues, so during COVID for instance every week they have been distributing food and support to local residents.

Traditional consultation methods were used such as one-off events with flip charts where the authorities then analysed the feedback and decided on the solutions without resident involvement. These methods are ineffective for many reasons. They assume many things. That people have confidence to participate. That people know what they want. That there are no barriers to access. That people experiencing greater health inequalities will be able to participate in the same way. That people trust the person asking the questions enough to tell them their real needs. These methods often do not allow for residents to be involved in the design and delivery of the solutions.

We were lucky in that we were being funded to do ABCD in the pure sense. What I mean by that it was truly resident led and bottom up – the charity I worked for had these values so I was able to do the work I had always been passionate about but had never been able to do. We worked to broad long-term outcomes, such as building skills and confidence, creating democratic groups and developing community resilience but we didn’t have the short term targets that Councils are usually so fond of and which can get in the way of trust. If a resident knows you have a target to get 20 people back to work in say 3 months, it then becomes more about your agenda than theirs.

I had time to build trust and relationships with residents at their pace and be led by what mattered to them. Many residents told me because of funding cuts they felt everything they loved had been taken away such as annual fun days and carnivals. We started to explore the idea of a fun day and I approached the authorities to help but was asked to ask the residents to forget the idea as the Council couldn’t afford a fun day. The Council failed to realise that they were missing a great opportunity – to coach local residents to build their confidence, to increase belief that they could influence change, to engage people on what mattered to them. ABCD is as much about the process as the outcome and I think that is difficult for people to understand as we are in such a target driven society.

That was the start of incredible change which led to a thriving resident led charity being set up to help run events in the community.  I weaved Positive Psychology into the project very discreetly – formal training and briefings wouldn’t have worked. I stood on the sidelines cheering them on, I noticed their strengths and when they became energised and fedback to them; I laughed with them, cried with them, I believed in them whole heartedly. I was trained in coaching and I used those skills – resisting jumping in with the solution but empowering residents to design change. I noticed that many authority figures did the opposite – they jumped in saying what was or wasn’t possible and expected residents to be passive recipients rather than active agents of change.

In some ways ABCD is immensely simple but in other ways it is hugely strategic as it involves conflict and ruffling feathers. Change always does I suppose.

When I see what is happening with the world at the moment and with campaigns such as Black Lives Matter and inequalities we have observed during the Pandemic, I feel that ABCD is not used enough to address health inequalities and I am passionate about getting the word out there.

I continue to support local community projects both in paid and voluntary capacities. My passion for ABCD, Positive Psychology and tackling inequalities will remain forever as I truly believe it can change the world for the better and create a more inclusive compassionate society where we see the best in everyone.

If you are passionate about this too and want to chat through solutions and ideas, get in touch – my number is 07851 247864 or georgina@ascentwellbeing.com or www.ascentwellbeing.com where we also deliver Positive Psychology and Wellbeing in the workplace, communities and education settings.