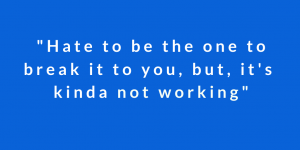 You’re cooking Sunday lunch; the kids have been banging on about how your Yorkshire puddings are too flat, so you’re keen to make the biggest, fluffiest puds ever.

…trouble is, you use the same recipe and same method as the last ones, and inevitably, the little buggers come out like soggy pancakes.

…so, it’s no wonder that awareness of the social enterprise industry isn’t growing, because we’re not learning from our mistakes and changing.

The biggest challenge we have is “raising awareness” of social enterprise as a business model; you know, making it attractive enough for more businesses to adopt.

Now, I’ve got to say, this is no disrespect to any of the social enterprise organisations that are working hard to raise the socent profile, but I think we’re missing a crucial element, which is to understand what constitutes a result.

So, when we say we want to raise awareness of social enterprise, what do we actually mean?

Decide what the tangible outcome is that we want to achieve by raising awareness of social enterprise and then put some numbers to it.

Let’s not just keep saying, “oh yeah, part of our remit is to raise the profile of social enterprise and we’ll do a bit of PR, campaigning and marketing etc.”

(This is the bit where I get into the nitty gritty, so just bear with me here – it’s useful to know!)

Ok, so you’d be forgiven for finding that a tad confusing. Let’s simplify it.

What these results actually show is that the sector isn’t growing as rapidly as the wider business sector, and “awareness” has probably only actually been achieved with those we’d consider “already converted”. By that I mean those who already know what social enterprise is, when the real challenge is to get the general public on board, raise awareness with business owners to increase conversion and to get the public sector wanting to work with social enterprises.

Educating and empowering the general public, public sector and business owners to understand what a social enterprise brings in terms of its social, economic and environmental impacts compared to its traditional business counterpart, and encouraging more spend and more adoption of the social enterprise model, are by far the biggest and best measurements we can use here.

So, let’s really start to understand what we want in terms of numbers.

If we look at things like the number of public sector contracts awarded to social enterprises, the numbers are actually falling – so if we’re trying to raise awareness in the public sector we’re failing at that.

Let’s get some data and put some targets for what impact we want to see and let’s be accountable as a sector for ensuring that those things happen and are delivered, because, and I repeat, IT’S NOT WORKING.

Whatever we’ve been doing for the last 15 years has not worked.

Social enterprise does not have the credibility and the brand that it should if we’ve invested money, time, resources and marketing and PR etc. over the last 15 years and we still haven’t got any further forward.

Let’s unite together on this and shine a light on the brilliance that is social enterprise!

(and afterwards, consider changing that Yorkshire pudding recipe at last)