This bitch ain’t no princess 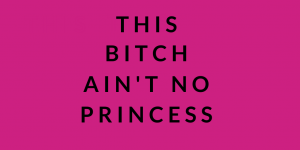 Forget what Disney tells you.

Not all women want to be saved.

In fact, what women really want is to SAVE.

Yesterday I was at an event packed with women.

Women whose talk about handbags wasn’t over the brand, but how ethically sourced its parts were.

Women whose stories weren’t about where their husbands were taking them on holiday, but in which parts of the world they were going to expand their business to.

The event, you might have guessed, was organised by WISE100.

And, it’s added fuel to my already burning fire…

Women make up 80% of the UK’s social enterprises, and for that, the industry has a certain ‘soft’ rep.

It annoys me. No. Scrap that, it INFURIATES ME.

Because we women in social enterprise, we’re not just observers, we’re doers.

And we’re everything Disney princesses are not.

We don’t just see what’s wrong with the world, we feel it, and we try to make it right.

We feel the discrimination of gender prejudice.

We feel the injustice of the gender pay gap.

We feel the inequality.

And we take that feeling and we use it as our fuel to do good.

So, we observe the other discrimination’s, injustices and inequalities, such as race, wealth, disability etc. and we devote our careers to eliminating it.

We fight for people who can’t fight for themselves.

We speak for people who have been muted.

And we change things for people who have been told to just accept it is what it is.

You call that ‘soft’?

The WISE100 event yesterday just confirmed what I already believe.

That women in social enterprise are true world-changers.

That I, a woman in social enterprise, am a true world-changer.

And I will continue to devote my life to being one.

So, when my daughter starts thinking about what she wants to do in her life, she’ll know she has the choice to become a world-changer, too.

Now, that’s the kind of Disney princess I want to see.