C’mon! What incentive is there now to start a social enterprise? 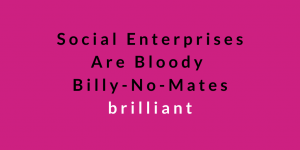 You prefer it when someone speaks openly, honestly, and real-ly, yes? Good. Because, I’m not hiding my bad mood from anyone right now. This is real. It’s shocking. And if I don’t call it out, who will…

“Knowing your own darkness is the best method for dealing with the darknesses of other people.” Carl Jung

It’s been a dark time for me, because what I feared would happen is coming true, and it’s an even darker time for social enterprises.

Let me set the scene for you, dear.

When lockdown happened, there we were joining with the charity and voluntary sector to get financial support for the sector.

You know, because, just like the charity and voluntary sector, we have commitments and so on…

Well, it turns out we were standing in the shadows of giants, rather than alongside giants, and that sector we like to refer to and talk about so much, you know, the give-back sector– well, it’s not real.

Social enterprises aren’t part of it, not in any significant way.

Heard anyone in government utter the word social enterprise yet?

Nope, they keep saying what a great job charities are doing (and they are) but so are a hell of a lot of social enterprises!

And, quite honestly, if nothing else comes out of this time, it will be the clarity that social enterprise is either going to stay insignificant or it’s going to have to get its act together, and without relying on the existing charity infrastructure.

How’s that for a wake up call?

We can’t rely on it, anyway – we’re not in that sector; it’s the charity and voluntary sector and the social enterprise sector.

They’re two different sectors and, if we have a glimmer of a chance of survival, we need to build the social enterprise sector bigger and more widely.

Let’s stop pretending we have friends at the top in politics that care about whether our sector survives or not.  We don’t even have friends in the middle or the bottom.

There’s two ways this can go – extinction or growth.

In all likelihood social enterprise will be broken by the system we’ve been saving for years.  The system that has cut so many budgets that our sector has had to step in and provide the much-needed support.  The support that is still much needed and will be needed even more soon.

…it either absorbs the business world, or it gets absorbed by the charity world.

Don’t believe me? Most of the conversations I’ve had lately have been with people struggling to see the benefits of being a social enterprise instead of a charity.

When the shit hits the fan, there’s no support for social enterprises, but a lot more for charities.

Out of 100+ funds, only 5-6 actually accept applications from organisations that aren’t registered charities.

The counter argument is, of course, that as social enterprises we’re businesses, and should not be relying on funding like charities need to.  Fair point.

But, let’s examine the support for businesses and how dysfunctional that is for social enterprises:

Furloughing staff – not going to work when people rely on you for help and support.

Business grants if you pay rates – not going to work again because a lot of social enterprises don’t have premises.

So, to put it bluntly, I can’t really see more businesses converting to social enterprises right now, can you?

And that’s probably why I’m so gloomy and fed up.

I’ve had this belief for so long that all businesses would become social enterprises, first out of choice and second out of necessity – I held that belief so dear for so long, and yet I always had this fear at the back of my mind that something might just tip it the other way.