Why would you have a charity and a CIC?

Written by Administrator on 06/11/2018 in Charities, CIC’s, Knowledge Centre 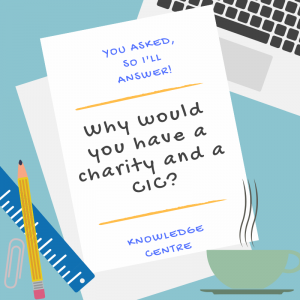 You asked, so I’ll answer – Why would you have a charity and a CIC?

Traditionally, charities used to set up trading subsidiaries (as standard limited by share companies) where the charity owned all the shares in the subsidiary. The main reason for doing this was if the charity wanted to undertake a trading activity that wasn’t part of the charity’s objects or core activities, or if the activities were seen as too risky (financially or reputationally) to keep within the main charity as they may affect the charity’s ability to deliver its core activities if it failed.

It’s also used where the subsidiary will be selling an activity, product or service that is completely unrelated to what the charity does – like an educational charity that sets up a subsidiary to make and sell cakes – with the expectation it will generate a profit that can be given to the charity.

Nowadays, many charities will set up CICs instead as it’s a way to define a clear community that will benefit and also have an asset lock in place, which can’t be done in the same way with a limited by share company. The CIC provides the flexibility that isn’t available via the charity – in terms of being entrepreneurial, innovative and risky – and if there are any surpluses generated these can be passed back to the charity to support the delivery of its activities, so the CIC pays no tax on its profits.

I’ve also worked with clients who have set up the opposite type of structure – a CIC with a charity subsidiary (although this was only connected through the membership as the charity was limited by guarantee), and also separate CICs and charities (where the CIC is limited by guarantee) and connected to the charity by having several Board members/trustees who are the same.

Other reasons why people have both a charity and CIC are so that the CIC can seek investment via shares, quasi equity or loans, which the charity would see as too risky. The CIC or charity can own property, and rent space to the other.

One of the other reasons why you might want both is because part of your work is charitable, and part of it isn’t – so it wouldn’t qualify to be delivered within the charity. The charity would be eligible for a lot more trusts and foundations that only give grants to registered charities, as well as being eligible for gift aid on donations.