Why don’t CICs get the tax breaks and discounts that charities do?

Written by Administrator on 06/11/2018 in Charities, CIC’s, Knowledge Centre 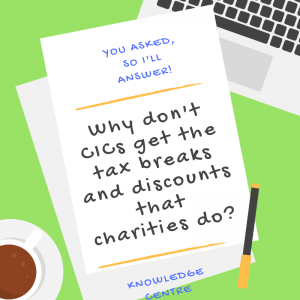 You asked, so I’ll answer – Why don’t CICs get the tax breaks and discounts that charities do?

Charities receive a lot of benefits due to the special nature of their legal structure – it is specifically for organisations that are doing something charitable and intending to have a public benefit. As a consequence of this, charities don’t pay tax on surpluses; can get up to 100% business rate relief; access to free software; reclaim Gift Aid on any donations they receive from individuals; and many more things.

However, CICs don’t get any of these benefits (they may receive some relief from business rates but that’s at the discretion of the individual local authority), and many people wonder why – especially when CICs are doing something good for the community or the environment. It’s because CICs don’t have to have a public benefit – so they aren’t actually charitable – they can restrict who they support.

In comparison charities have to provide a benefit to the public in general (or a sufficient section of the general public). If your CIC does have charitable purposes rather than just having a wider community benefit it would make sense to think about converting to a charity – as you meet the criteria to be a charity and can then receive the tax breaks and other discounts.

CICs are not designed to be in competition with charities – as CICs are designed for social enterprise and for entrepreneurs who have an idea that benefits a defined community and want to set up without the governance that comes with a charity. CICs are expected to trade like a commercial business, whereas charities aren’t expected to do this (although many do), and CICs are actually meant to be profit making entities unlike charities which are classed as not for profits.

CICs have flexibility that can’t be achieved in the same way through a charity – as they can pay individuals/investors dividends (if they are set up as limited by share CICs) and the Directors can be paid easily from the CIC (through taking salary or other forms of income), and they can be set up with just one Director.

They can change their community of benefit and activities relatively easily (through a special resolution) – although they can’t stop being a CIC (unless they convert to a charity), whereas charities need permission to change their objects. Because of these reasons, CICs aren’t eligible for the tax breaks and discounts that charities get.