How do I set up an international charity?

Written by Administrator on 21/09/2018 in Business Planning, Knowledge Centre 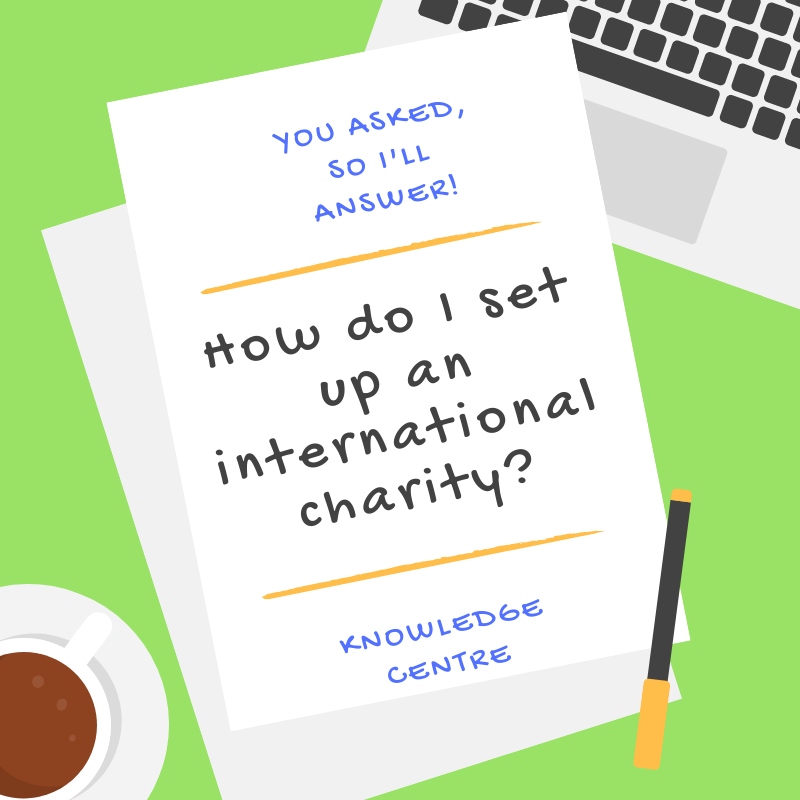 You asked, so I’ll answer – How do I set up an international charity?

If you’re like a lot of social entrepreneurs you might want to expand your reach and work internationally. Having worked in Thailand recently, I thought I’d share how you can set up a charity that works internationally.

If you already have a CIC, company or a charity in the UK, and now want to expand the geographical area you work in to include other countries or the entire world then you can choose any of the three options below. If you don’t have anything set up in the UK already then option 2 or 3 are relevant for you.

1. Change the scope of your existing organisation to include international work too

For a CIC this is done via an amendment to the object statement. To do this you’ll need to fill in form CC04, complete a special resolution, amend your articles to reflect the changes and also fill in form CIC14. If that sounds complicated – don’t worry the CIC Regulator has a link to all these forms on their site: www.gov.uk/government/publications/community-interest-companies-business-activities/cic-business-activities-forms-and-step-by-step-guidelines#alter-the-object-statement-of-a-cic

For a charity it’s very similar – in that you need to change the object statement. But how this is done depends on the way your charity is set up:

Unincorporated charities – if your income is under £10,000 and you don’t own land you can change the objects yourself without permission from Charity Commission, providing they are still charitable and as similar as possible to the objects they replace. You then approve these at your next meeting and send an updated copy of the constitution to Charity Commission (if your charity is registered with them).

For charitable companies and CIOs you’ll need to get Charity Commission’s permission to make the changes first in writing – before you approve a special resolution at your general meeting. Once you’ve approved the changes at your meeting you need to send the special resolution and the updated Articles to Charity Commission within 15 days. If you’re a charitable company (not a CIO) you also need to send both these documents to Companies House within 15 days.

If you’re set up as a limited by guarantee or limited by share company (not a CIC) then you need to fill in form CC04, complete a special resolution and amend your articles – and send these documents to Companies House.

2. Set up a new CIC or charity to work overseas

3. Set up a not for profit or foundation in the country you want to work in

Many countries have a foundation or NGO (non-governmental organisation) legal structure that is used by charities. These structures typically require individuals who are resident in that country to be trustees as well as you (but not always). Depending on which country you want to set up your not for profit in, it can be costly and require a legal advisor to complete the process. It’s not usually as simple or as cheap as it is to set up in the UK. For example, if you wanted to set up a NGO in Kenya you’d need to have at least one Kenyan as a board member.

I’ve had clients that set up UK CICs (as a similar type of legal structure isn’t available in their country) and worked in Greece, Spain and South America. The same with charities – where the charity works in both the UK and specific countries overseas.