What is a good SROI (Social Return on Investment) figure? 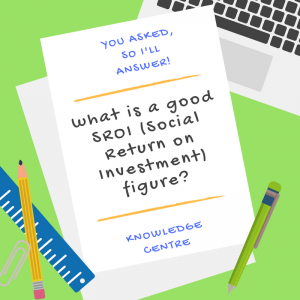 You asked, so I’ll answer – What is a good SROI (social return on investment) figure?

Technically, any figure over £1 is a good social return on investment figure because it means that you are generating more social value than it is costing you to deliver the project, services, or activities.

However, most organisations would like to have a social return on investment higher than just over £1. If you think about how a social return on investment figure is calculated, the key elements to it are the cost of the service or activities that you’re delivering, and then the values that you include for the different outcomes you achieve. Plus, you’ve also got a number of assumptions that you make in the calculation around dead weight, drop-off, attribution, and displacement, which all affect the ultimate number that you come out with at the end.

What this means in terms of doing the calculations is that if you have a very low cost, it’s likely that your social return on investment figure will be higher than what some other organisations may potentially generate. Also, depending on the valuations you use for your outcomes, you could end up with a very high social return on investment figure.

But in terms of thinking about what a good social return on investment figure is, it very much depends what client group you’re working with or what activities or services you’re delivering, because it will affect what your costs are and also the types of outcomes that you can achieve for them. If you think about an organisation that works with people that are perhaps unemployed, but don’t have any other difficulties, then they’re usually much easier to reach and engage with. It is also easier to get them progressing and moving closer to employment, so the costs of delivering that service may be quite low because it might be an online service or it might be delivered via group sessions.

Whereas if you’ve got individuals that are unemployed but they’re perhaps also suffering with health problems or they’re ex-offenders, previously had drug or alcohol problems, then there will be a range of other issues that also need to be addressed in order for this person to be employment ready. The cost of delivering that service is likely to be much higher, and it’s likely to be more intensive kinds of support, so perhaps you’ll have one to one sessions and you’ll also have a number of other agencies providing support in order for that person to move and progress into employment.

If you think about these two organisations, both delivering similar services in terms of getting people employment ready or into employment, but one is working with a client group where their costs will be relatively low, and the other is working with a client group where they’ll have much higher costs. If they achieve the same level of outcomes – for example – let’s say for both organisations, 50% of the individuals they worked with went into employment successfully. The one where it’s working with the easier to reach client group would automatically have a higher social return on investment even if they used the same valuations and made the same adjustments, because their costs would be lower.

If you were to do a comparison directly of these two organisations, then it would appear that the first one is better because their social return on investment figure is higher. But actually, without looking in more detail at the two organisations, and understanding the difference in their cost base, you could make that assumption incorrectly.

The alternative way in which the social return on investment figure could look higher is if one of these two organisations had used higher valuations for the outcomes that they achieve, which would then mean that they’ve got a much higher social value figure. So when they do the social return on investment calculation, it would appear that, again, they are better than the other organisation because they’ve used the higher value, perhaps for outcomes like getting people to complete training, people into employment, or overcoming other barriers and obstacles.

Generally speaking, what tends to happen, if you’re working in employment-related areas, most social return on investments will be between around £5-9 for every £1 that you spend on the service. If you’re working with more disadvantaged groups, then obviously it can be lower as described above. But again, depending on the types of outcomes you’re achieving for those disadvantages groups, if you’re working on things around their mental health, reducing ex-offending, etc., as well as the employment outcomes, then you could be looking at a higher social return on investment because you’ve achieved more outcomes for them, so the figure could be between £10-14 roughly or higher.

In conclusion, in terms of what a good SROI (social return on investment) figure is, it depends on the types of outcomes you’re achieving, the client group you’re working with, and the costs that you have in terms of delivering those services or activities.

This website uses cookies to improve your experience. We'll assume you're OK with this, but you can opt-out if you wish.
Be aware that opting out may affect or disable some features of this website.