How much does a mentor cost?

Written by Administrator on 19/02/2018 in Knowledge Centre, Mentoring, Social Enterprise 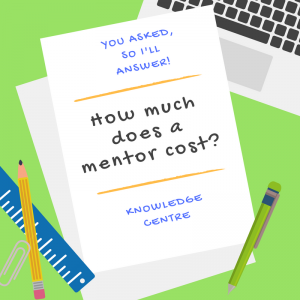 You asked, so I’ll answer – How much does a mentor cost?

What a great question – mentors come in all shapes and sizes – and cost from nothing (as they volunteer their time) to well known/famous mentors that charge in excess of £10,000 an hour.

The three month programme has been designed specifically for people that have already got existing social enterprises rather than for start-ups because if you’re in the start-up phase, generally what you need is perhaps one or two mentoring sessions to get you started. Whereas people that have existing social enterprises tend to have more areas they need support with so the three month programme works much better for them.

The programme is designed over a three month period because it’s an ideal period over which to set goals and prioritise things. People set goals for 90 days or three months and what that means is you could potentially work through four sets of goals and objectives for your organisation, and very quickly move from one particular issue to another, over the course of a year.

In terms of the cost for the mentoring programme, if you were to have the three month programme with the initial 90 minute goal setting session, followed by weekly mentoring sessions of up to 45 minutes, the cost is £200 a month or alternatively, a one off payment of £500 for the three months. Alternatively, if you chose to have the fortnightly sessions instead of the weekly sessions, then the cost of the mentoring programme reduces down to £125 per month, or a one off payment of £350.

The other thing in terms of mentoring is just to be aware of what you will potentially get out of mentoring, and the benefits of having a mentor (see Do I need a mentor?). The mentoring programme is designed to support you in order to achieve your goals and to keep you accountable in terms of making sure you’re staying on track. I’ll also provide advice and guidance on the areas or issues that you’re having within your social enterprise, and often constructive criticism to help you progress. If you were, for example, looking to grow your trading income, then that could be the focus or one of your goals for the three month period. You’ll also be able to work on any money blocks or limiting beliefs you have around abundance and success with me, and you’ll improve your focus so you get things done in less time.

You would set goals at the initial meeting, then you would be supported to achieve those goals with guidance and then each week/fortnight you’d be given specific actions and agree to those actions with myself. You’d go away and work on those actions in order to achieve that goal within the three month period. The process is very much a step-by-step process in order to make sure that you do achieve your goals rather than you setting goals and then you’re left to get on with it on your own.